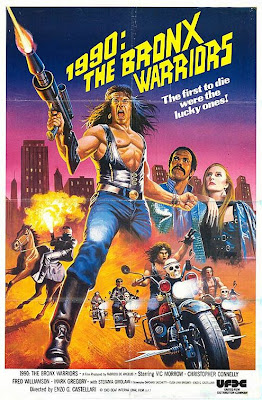 Tonight marks the end of the mini-bout of Black History Month done in true Mayfair style. To counter the horror Blaxploitation that was the genius of Blacula, last night we screened likely the most mainstream and critically praised film in Geek Night history with Do the Right Thing. Which might not seem like the most geeky of films at first thought, but any film with someone like Spike Lee in the lead role definitely holds a tinge of geek to it. Plus of course the packed cast holds none other than geek movie icon Samuel L. Jackson, amongst other talents.

But, that was last nights film. Tonight we showcase '1990: The Bronx Warriors' A knock-off grindhouse Italian picture that takes influence from (or rips off from depending on if you're looking at it negatively or positively) The Warriors, Escape from New York, and a lil' bit of Clockwork Orange. A moviegoers guilty pleasure calibre of a film, which although not quite Blaxploitation, holds a place alongside that type of movie thanks to the inclusion of actor Fred Williamson (star of Hammer, Black Caesar & Black Eye to name a Blaxploitation few).

Another chance to see a rare bad movie gem up on the big screen. One night only for Lost Marbles Geek Night - Friday February 18th at 11:30pm at the Mayfair.
Posted by batturtle at 4:06 PM