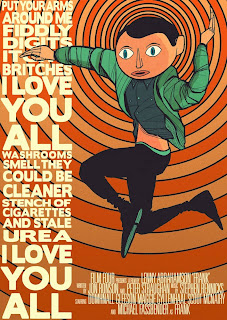 Went to see Frank tonight, we have it at the Mayfair Theatre for the next couple of nights. Anyone who complains about there being no originality in movies just isn't trying hard enough to watch original movies. They are everywhere! This movie has Michael Fassbender starring as an eccentric lead singer of a band that worships him in a cult like manner, who never removes a giant paper mache mask. That old re-hash of a story. There are plenty of great original movies being made, you just have to go and watch them instead of watching the latest live-action Transformers train-wreck.
Posted by batturtle at 2:49 PM