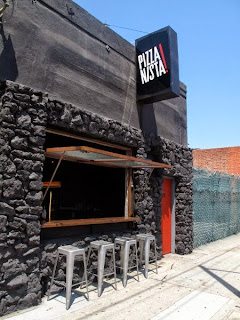 If ever forced to visit the fine city of L.A. to hand in paperwork at the Canadian Consulate due to having your passport stolen in Vegas, I highly recommend that you visit Pizzanista. I partook in a slice of Vegan Veggie pizza and then went back for seconds.

The adventure from Vegas to L.A. went well. The bus trip allowed for some lovely vista sights, I spotted what I think was a wild donkey. There were tent and trailer set-up's in the middle of nowhere, along with Area 51 calibre seeming locales, cactus scenery, and scary cliffs.

Thanks to my girlfriends dad, we were blessed with a car service to transport us around the city for a couple of hours. Our driver was a lovely motherly lady who was a great help in our quest, and refused to take even one extra step. She made us feel like quite the Hollywood big shots. Got to the Consulate with time to spare, but alas had to go get new passport photo's, the ones I got at the post office weren't approved. Then, of course, had to hit numerous photo places to actually get the things. The clock was ticking, and we got back to the Consulate with only moments to spare. I think that my girlfriend was freaking out a bit, but for better got worse I hit a zen like calm at this crazy misadventure that w found ourselves thrown into. References were contacted and approval stamped and my girlfriend said she would've hugged the kind lady assisting us if there was not a glass window between us.

We had time left with our driver, and the first place that popped into my head to do while having a few tourist moments to spare in L.A., was the Grauman's Chinese Theatre. It was nowhere near where we were, but our driver said it was no problem. It made for a great quick tour of the city, got to pass by all kind of landmarks like the Capitol Records building, the Griffith Observatory, the Hollywood sign, and a bunch of uber-rich homes in the hills. At the theatre were got to stand in the footprints of the greats, ranging from John Goodman, to Marilyn Monroe, to R2D2.

We saw no less than four film shoots. No celebrity sightings, but one director sitting in a director's chair behind some monitors, who was such a stereotype that he might as well of been from a Saturday Night Live sketch. He had one a scarf, berret, giant sunglasses, a diamond encrusted wrist watch, and hipster facial hair.

We ate at the aforementioned Pizzanista, played some bus station Galaga and Ms Pac Man, and then were back to Vegas. I don't recommend falling victim to theft, but if you do, at least partake in a fun adventure in its aftermath.
Posted by batturtle at 11:30 PM