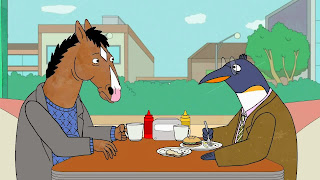 Finished watching the Netflix animated series Bojack Horseman. I initially tuned into the show because it featured an A-list comic voice cast,including Will Arnett, Amy Sedaris, Alison Brie, Paul F. Tompkins, Patton Oswalt, & Kristen Schaal. Before watching,I thought I might soon give up on the show,since it seemed like it might be along the Seth MacFarlane genre of cartooning, which I'm not a fan of at all. I was pleasantly surprised that show show had much more depth, and an unexpected amount of drama. It's still a show about a talking hose-guy, but it reminded me of the best of cautionary Hollywood fame and fortune fall from grace tales. And, it seems to be another example that traditional teevee is in its final days, and that the Netflix world is where our home entertainment intake will continue to successfully come from. Network teevee and cable networks must be in a deserved panic at the ever looming extinction of teevee as we have known it.
Posted by batturtle at 1:38 PM