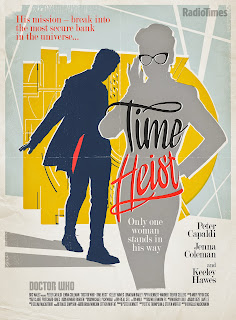 Watched the latest episode of Doctor Who - episode 8.5, Time Heist. A few people have said to me that they are hesitant to jump into a 50 year old series...or even just an 8 year old series (which the current incarnation is in). I continue to implore that the series isn't really all that hard to jump in to. Our hero travels through time and space saving the universe with help from companion humans. I only know the show from these modern 8 seasons, and have only seen a handful of the classic more low-budget, black box theatre style offerings from the 1960's and later. I follow the continuity of the mythology just fine. Doctor Who ranks high alongside many of the other excellent shows on during this golden age of television. If you haven't sen it, you should.
Posted by batturtle at 5:18 PM