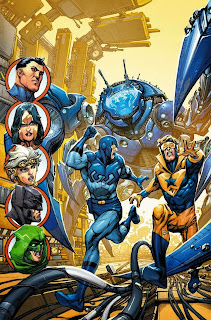 A few days ago, while stuck in another country and rather stressed out, I learned that Blue Beetle and Booster Gold were going to be in Justice League 3000. As I let me friend know via social media, this good news after a bad event, made me so happy that I almost shed a geeky tear. Really. For, not only are these two of my favourite characters making a return to DC Comics New 52 universe, it's the ones from the old universe. These aren't rebooted characters,but the originals making their way into th future of the current DC universe thanks to the power of comic book science fiction. Plus, they are being written by the masterminds who wrote the Justice League that I grew up on in the 1980's, J.M. DeMatteis, Keith Giffen. 'Tis a good time to be a geek indeed.
Posted by batturtle at 3:01 PM