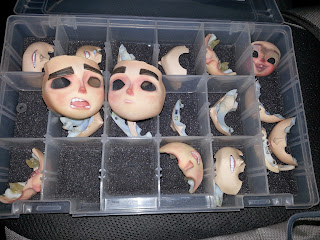 I always get defensive when someone claims that Ottawa is a boring town and that there's nothing to do here. I think there are people like that in very city. People who like to sit at home and complain instead of making a bit of effort to find something fun to do. I always have the train of thought that if you don't like it here,why don't you move to somewhere else? When I hard the hosts of one of my favourite podcasts being similarly angered by people complaining about L.A., I felt akin to his defensive rants defending the city he loves.

Today, for example, I got to attend a screening of short films at the Ottawa International Animation Festival. I followed that up by a separate event in honour of the upcoming movie The Boxtrolls. Where, amongst a fun presentation, behind the scenes stuff and a q&a, the host from the animation studio passed around some stuff show-and-tell style. I got to hold in my hands actual pieces of stop motion animation history in the forms of puppet faces from Coraline and Paranorman. It made fellow animation nerd friends very jealous. I never get to go to as many events as I'd like, but I always make sure to hit the fest at least a couple of times. It is one of the awesome things in this town that you musn't miss out on participating in every year.
Posted by batturtle at 11:31 PM