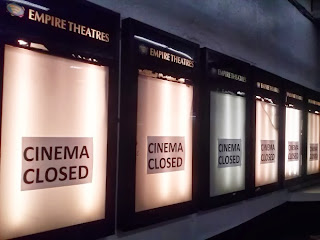 The World Exchange mini-multiplex here in Ottawa is officially gone. I guess they were holding out some hope that someone else might want to take over the location, but that isn't going to come to be. My most fond memory of the place was going in underage to the opening night screening of the (unfairly) R rated 'Army of Darkness'.

Many journalists and Ottawa residents are reacting to the location closing down as if it signifies the death of humanity as we know it. It's sad to see a theatre close, and even more unfortunate for some people to lose their jobs, so I can understand the negativity.

My frustration is that if many of these people would have shown that much concern while the place was open and had actually gone to see movies there, it would still be open. People often ask why Mayfair Orleans closed. It's not that difficult to figure out. If a movie theatre packs the place with patrons every night, it's not going to close. Also, a midst all the sadness that no one can go see movies in Ottawa except for in suburbia anymore, they neglect to mention that the Mayfair and Bytowne still exist and are showing movies.

Ottawa is a very rare city that has not one, but two classic style single screen cinemas in their central core. Very few cities on the entire planet can equal that claim. Unfortunate to see another movie theatre go extinct, but instead of fretting over that, why not go out and catch a movie at a good old fashioned theatre?
Posted by batturtle at 1:31 PM