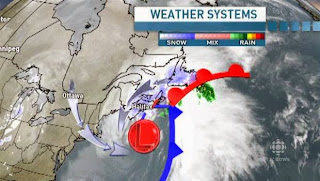 Ended up having to flee Halifax about 12 hours earlier than anticipated. A snow-ma-geddon onslaught was imminent that would have instigated us staying in town for an extra two days 'cause all the flights were being cancelled. That would have greatly hindered some back to Ottawa plans greatly. We managed to get onto a bright and early flight and made it back to the nations capitol. There was slight panic when despite having e-mail proof in our favour, it ends up that the travel agency didn't properly contact the airline. They also somehow tagged on a $22,000 fee. Which was interesting, because short of hiring a private plane, there's is not a charge that big even available. Luckily the lady checking us in was smarter then the travel agency and we saved $22,000 bucks off our travels.

It was close though, end of the world lookin' storm clouds were looming as the plane was being prepped for departure. When we landed, the big screen monitor in the baggage claim area were showcasing a broadcast from some poor CBC weather person forced out into the snowy anarchy of the streets of Halifax.
Posted by batturtle at 12:37 PM