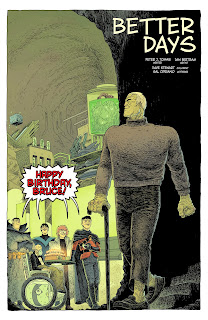 As the comic book fates would have it, the reboot Detective Comics #27 comes out in the 75th anniversary year of Batman's first appearance in in the original Detective Comics #27. One of the stories is written by Peter J Tomasi (who wrote some great Damian stories in the pages of Batman & Robin), and features an alive and grown-up Damian at a birthday party for a 75 year old Bruce Wayne. From a geek pov, this short story probably falls under the umbrella of a 'What If?' or an imaginary story (imaginary within the imaginary world that is). It gives me hope that there's a chance Damian will be resurrected (common in comic book character circles of course), and that more Damian stories are on the horizon.

Posted by batturtle at 2:35 PM