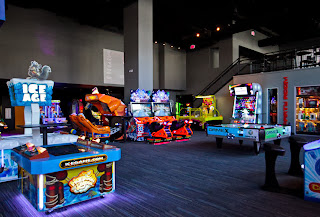 Went for dinner and video games at an Atlanta eatery called Game X. I was hoping that it would be an old school arcade with food. It was a bit more modern and flashy. Their menu's were even in video game boxes. They had a couple of classics like those basketball things and table-top hockey (which our friends to the South call bubble hockey). They also had an insane Pac Man themed air hockey machine that shoots out thousands of pucks all at the same time in a barrage of defensive / offensive insanity. Besides for that there were lots of video games featuring horrible amounts of gun violence and skee ball. And tickets can be traded in for high caliber, big value, fabulous prizes...like a switchblade comb. There was no Galaga, the cornerstone of any worth while arcade, but still managed to be a good time.