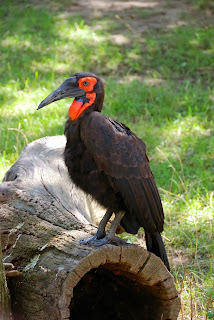 Today's paid vacation inbetween working hours in Atlanta event was a visit to the zoo! I'm not sure what levels of hypocriticalness it is for a vegan to visit a zoo. I don't know if I lose points, or if it's okay as long as it's a legit zoo where the animals aren't being beaten and kept in tiny boxes and then turned into gloves and lampshades when they die.

Th zoo in Atlanta mustn't be that harshly looked upon by naysayers though. It's a sprawling green-space filled with giant plots of land for their bigger animals and nice big surroundings for their smaller beasties. They had all the zoo favourite mainstays: elephants, lions, rhinos, giraffes. Giraffes look so alien, like something that a Jedi should be riding in a Star Wars movie. There were also some birds who looked like they popped up in prehistoric times right after dinosaurs disappeared.

Then there was this black-beaked Southern ground horn-bill fella who kept trying to give my girlfriend a rock. If not for the glass between us, she would have walked away with an awesome rock gift from her feathered admirer. Or been attacked by it's mate who seemed quite angry about his rock sharing generosity. Also, otters are adorable. I'm lucky that I was able to pull myself away from watching them and didn't just stand there all day before being forced to leave.
Posted by batturtle at 11:38 PM