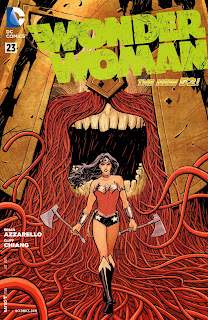 More now then ever, geeks have a voice to let their complaints and anger known thanks to the power of the interwebs. I try to avoid message boards and talk-balk sections and such, because for the most parts people annonomously expressing their opinions there infuriate me to no end. My favourite part of this kind of thing is wild, over-exaggerated, untruthful comments born from anger about a plot point happening to a super-hero that they think could be written better by themselves.

The DC Comics Universe re-booted a couple years ago. Evidently this has been a great financial success, but of course, it made for a heap of nerd rage pushed towards the folks at DC. It comes to mind, because recently I read a post online that stated that there was "literally" nothing good being produced at DC Comics. Now, of course everyone is entitled to their own opinion...but this is just plain not true. Not even close.

I wonder if this kind of single minded comic book reader had equal furious anger when the Silver Age kicked in with new versions of The Flash and Green Lantern and others. Or if the 1980's version of this person said they would never read a comic ever again after the universe combining events of Crisis on Infinite Earths. It seems that at every major story-line, people get infuriated, but then comics keep on selling.

Saying that DC is producing nothing but garbage is ridiculous. If you believe this, you clearly haven't been reading Batman, Animal Man, Green Lantern, All Star Western, Larfleeze, Batman & Robin, or Wonder Woman. Are they different then before? Yes. Should you fear change? No. If you do, you should be content to just re-read all the old comics in your closet instead of reading new stuff.
Posted by batturtle at 12:47 PM