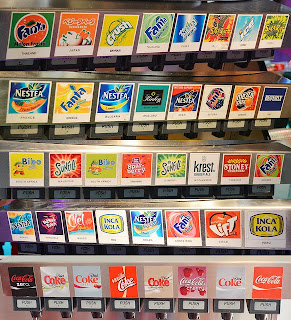 The World of Coca Cola museum in Atlanta is indeed a giant propaganda piece which routinely tries to convince you that Coca Cola is the greatest thing ever created in the history of the universe. Despite that continued level of Orwellian like brain-washing being thrown your way, it's a very entertaining and incredibly interesting place to visit.

They have on display original works of Norman Rockwell and Haddon Sundblom's work which introduced the world to the quintessential Santa Claus. It's a fascinating look at the evolution of advertising, and at how the Coca Cola logo has become one of the most recognizable images on the entire planet. There was a cool display with hundreds of post cards from all over the world that all happened to have a Coke logo hidden within the photo. Plus they have a big Muppet calibre polar bear mascot.

Best of all is near the end of the visit, you get to go into a room and taste test 60 or so different brands and flavours of Coke products. Some tasted good, some tasted weird, some was a completely alien beverage of an experience. There was one infamous Italian flavour called Beverly. It almost killed my girlfriend. I soldiered through every single kind, mostly 'cause if not I knew that my friends would taunt and think less of me. The endeavor left me genuinely woozy, but filled with sugary beverage consumption pride. After undertaking that grand quest, you feel like you might never drink any kind of Coke ever again. Which seems like a weird thing for them to make available for visitors to do in a Coke museum. You would think that thy would not want to turn one off from cola for the rest of their lives. So, it's good that before you leave they give you a free bottle of Coke to enjoy later.
Posted by batturtle at 11:16 PM