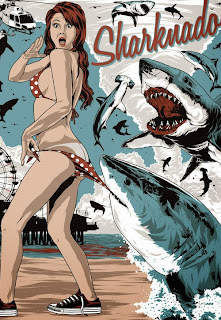 Very pleasantly surprised, Sharknado attracted a packed house at the Mayfair. The patrons in attendance were in the perfect mood for this genre of movie, and a large portion of the audience even responded with a standing ovation by the time the credits rolled.

Sharknado was indeed a bad movie. I can see why it has garnered much more attention then all the SyFy teevee movie offerings that have come before it. In-between the Playstation 2 video game caliber sharks and sub-par acting, there were quite a few really great gore gags, comic moments and knowingly over-the-top action. This team with a bigger budget might just produce something actually good. I liked it better then both the recent Piranha movies, and they had a much bigger budget then this tiny budgeted small screen production. It's quite the back-handed compliment, but Sharknado was a really good bad movie.

It was genuinely one of the most fun nights we've ever had at the Mayfair. Thanks to all the patrons of questionable taste who joined us for a fantastical evening.
Posted by batturtle at 11:59 PM