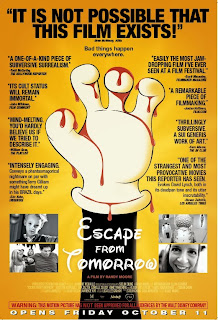 Tonight is your last chance to catch Escape From Tomorrow at the Mayfair. It may be your last chance to see it on a big screen ever, considering that at any moment the Disney lawyers might wake up their team of high priced lawyers and unleash the vengeance. This movie simply should not exist. Or, since exit does exist, it shouldn't be available to be seen. Considering that Disney has been known to sue daycare centres that have their characters painted on their walls, but they have not put a stop to this movie, is very peculiar.

The film is a dissent into madness / midlife crisis indie dark comedy that just happens to be set in Disney World. Meaning that, for this guerrilla style black & white indie style endeavor, they actually snuck into the fabled theme park to shoot their story. There are countless Disney images caught on film. The Disney name, Disney princesses, and characters like Buzz Lightyear are integral to the plot. If the undertaking of shooting this production under the Orwellian eyes of the Disney theme park over-lord's wasn't enough, the fascinating part at this point in the game is that there have been no lawsuits from the Disney camp.

Some have speculated that Disney is looking the other way in order to not bring the movie attention. From what I understand though, that can't be the case. If they don't step in, it could set a precedent for all those other punk artists and filmmakers to point at when they make their own un-approved Disney themed media. "Escape From Tomorrow did it and you didn't care! So we can do stuff too!"

Gimmick aside, I actually liked the film too. Very weird, very creepy, and doesn't pull any punches when events start to get really bizarre and go horribly wrong. Having said all that though, byt the time the credits rolled, I still really wanted to go to Disney World.

Take part in the phenomenon that is Escape From Tomorrow, at join us at the Mayfair tonight at 9:30pm.

Posted by batturtle at 9:36 AM