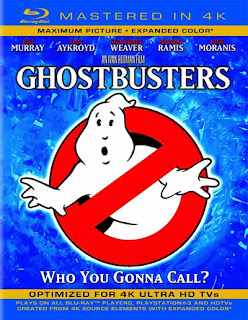 I got the blu-ray 4k edition of Ghostbusters in the mail. I hardly ever watch movies at home anymore. I watch a ton of movies at the Mayfair, so home entertainment intake is reserved almost completely to catch up on never ending teevee shows that I wanna watch. I love Ghostbusters though, and it was super cheap, so I could not resist.

Years ago, I remember joking that the VHS pan & scan version of the film was racist because Ernie Hudson was pushed out of frame through much of the movie. When a rectangle got cropped into a square, the fourth Ghostbusters gets left just outside of frame on more then one group shot.

The unforgivable treatment of Ernie Hudson / Winston Zeddmore sadly continues into the blu-ray era of at home movie watching. On the blu-ray Ghostbusters case, there isn't one mention, credit, or photo of either the actor or the very important to the film, every-man, voice-of-the-audience character. How can the character who spoke the line "Ray, when someone asks you if you're a god, you say YES!" be ignored in such a manner? I hate to throw a word like racist around...but I think this blu-ray box is a racist.

Posted by batturtle at 2:46 PM