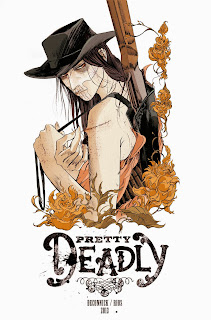 I don't know if a single person can take full credit for what's going over at Image Comics, or it's a batch of behind the scenes crew, editors and creators all just hitting their stride at the same time. I think that Image puts out more diverse and high quality books then any publisher in comics. I almost wish that they weren't so on the ball, because I am spending a lot of money on them.

Their latest success story is the supernatural western tale of Death's daughter, Pretty Deadly, from Kelly Sue DeConnick and Emma Rios. It's got beautiful art, an original story, and a central character that is sure to have Hollywood salivating to sin up the motion picture rights post haste. Check out issue #1 in anticipation for the soon to be released second issue. Thank you Image Comics. Yet another series to read. Now let's hold back on releasing any more amazing comics for a little while. I'm not made of money.

Posted by batturtle at 3:29 PM