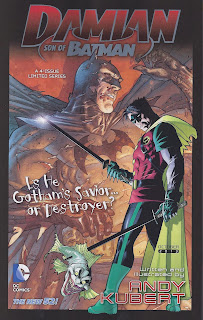 The new Damian mini-series is being described as "a possible future that may never be" by DC Comics. The first issue didn't blow me away. Grant Morrison's literary shoes are pretty big ones to fill, even though the writing gig on this series goes to its artist and Damian co-creator Andy Kubert. I will continue to support this mini-series none-the-less. I very much want this character brought back to life and put back into main DC continuity. Hence, I will gladly give my tiny bit of financial support towards anything that makes Damian look like a popular character to DC Comics.
Posted by batturtle at 4:34 PM