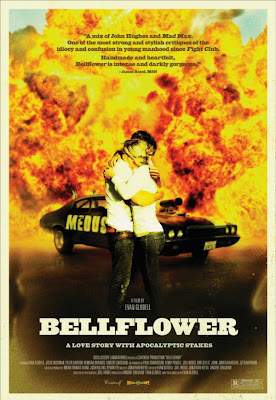 Tonight and tomorrow at the Mayfair (Oct 12 at 9pm and 13 at 9:30pm) are your last chances to check out Bellflower, the knock-out directorial debut from Evan Glodell. Supposedly made for only a $17,000 budget, which I will say in a complimentary manner that I can't imagine a budget so low to be true upon seeing the finished product. I mean, the movie has a flamethrower and an amazing post-apocalyptic Mad Max style car in it ! Just one of those things alone has to cost about the much right?

My comment as the credits rolled, after a horrifically mesmerizing and explosive climax to the story was to say, "Well...that was something!". In terms of modern day film-making comparisons, it reminded me of 'The Devil's Rejects' style of characters seen from Rob Zombie mixed into the darkest of Quentin Tarantino's universe of storytelling. Somewhere around those two comparisons, mixed with slacker characters from Richard Linklater or maybe Kevin Smith if his actors did more than chat about Star Wars and lean on corner-store countre-tops.

All of the characters were very interesting and watchable, but I didn't like any of them. And that's a trait that seems to be lost in the storytelling styles within present day cinema. Everyone has to be too good now-a-days. Hence, it also reminded me of something you might have seen back in the hey-day of the 1970's. Something that might star Steve McQueen, except more disturbing. And I think it's the most impressive directorial debut I've seen in a long time.

I saw Bellflower last Friday night, unfortunately not many other people did. I think there were eight paying customers there that night. For the screenings tonight and tomorrow, I hope more people find their way to the theatre (maybe folks won't be so busy with Thanksgiving obligations and travels). I say that partially as a co-owner of the place of course, but also 'cause this is a movie that I hope gets some support, and that people get to see big screen style. I want to see another movie from these guys. 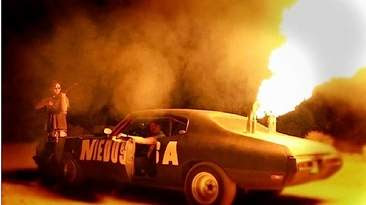 Don't just take my word for it, check out the Chicago Sun Times review from King of all the critics in all the land, Roger Ebert.
Posted by batturtle at 2:20 PM