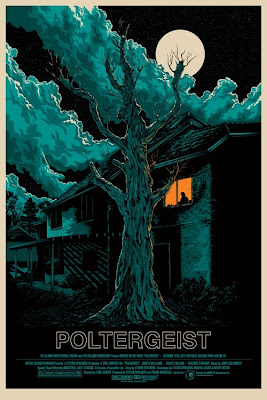 Released only a week apart from that other 1982 Spielberg movie, 'E.T. The Extra Terrestrial', was a much scarier view of a modern American suburban family, 'Poltergeist'. The film went on to become a box office smash, was nominated for three Academy Awards, spawned two sequels, and is on various top 100 lists from the likes of Bravo, the American Film Institute and others.

The film also got quite a bit of legit media and tabloid recognition thanks to two things revolving around the production. There has been quite a bit of superstitious talk of trouble on-set while the movie and it's sequels were being made. There were also a number of deaths amongst the cast, which can really for the most part be considered coincidental considering the number of people that work on any film. Sadly of course, one of these deaths include that of young actress Heather O'Rourke, the young blonde actress who uttered the films often repeated catch-phrase "They're Heeeeere!"

There has also been back and fourth controversy to this day as to who was actually the creative force and director of the project. Most reports seem to lean towards that is actually much more a Steven Spielberg film than a Tobe Hooper film. The poster for the film has 'A Steven Spielberg Production' listed right at the top of the credits, he wrote the story, and he was a producer on the film. On top of normal film production duties in that effect, he also did some if not all of the storyboards and a number of actors said he was more of a director on the project than Tobe Hooper was. Spielberg has been diplomatic over the years to his involvement on the project and to Hooper's deserved directorial credit. I'm suspicious though and lean towards believing the rumors and reports that Spielberg was in fact the director of at least most of 'Poltergeist'.

'Poltergeist' may have been the first horror film that I saw. It was a PG film back before the advent of a middle-ground rating in-between PG and R, so kids could get away with watching it without seeming to break any censorship rules. It's the perfect kids scary story, and if you see it at the right age it has a good chance to scar you for life. Any numbers of phobia could result as an after-effect to watching the film, including that of clowns or trees or television sets or suburbia in general even. Some cross-over effect of having seen 'Poltergeist', the extended 'Thriller' music video and 'Night of the Living Dead' at a young age are to blame or to thank for my love of the horror movie genre I'd say.

See 'Poltergeist', another great pre-Halloween screening tonight (Monday October 17th at 9:15pm) as part of Lost Marbles Geek Nights at the Mayfair. Answer a relatively easy bit of trivia and you even might win a prize!
Posted by batturtle at 1:49 PM