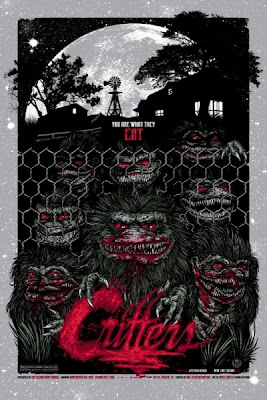 Although the October installment of the 'This Month at the Mayfair' article came in a couple weeks late due to the poor interviewed being super ill and bed-ridden, it is at long last up on the (cult)ure magazine website for all to read. Went up on the site last night after we did a last minute interview to explore the second half of month, since some of the article was cut because the movies talked about had passed by on the schedule already. Upcoming programming at the theatre ranging from 'Winnie the Pooh' to 'The Rocky Horror Picture Show' were all discussed.

Also for the piece we chatted about this-evenings Lost Marbles Geek Night presentation of 'Critters' (Friday October 14th at 11:15pm). The film is one of the rip-off / wannabe clones that came out on the heels and success of 'Gremlins'. Though it is a bit different since the monsters are from outer-space and they have intergalactic bounty hunters chasing them. The movie was directed by Stephen Herek, whose next film was 'Bill & Ted's Excellent Adventure, and spawned three sequels (one of which was the first role for a young Leonardo DiCaprio). 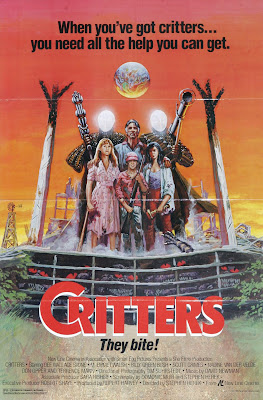 A bit shockingly considering the movie was low-budget, B-grade, knock-off fare, Roger Ebert gave the film a positive review back in 1986. In surprising review situations such as this, I'm always reminded that Roger also liked the Tomb Raider movies. None-the-less, continue checking out our Halloween programming, and see if you like a movie about fuzz-ball alien eating machines terrorizing a small town as much as the most powerful film critic of all time did.
Posted by batturtle at 2:06 PM