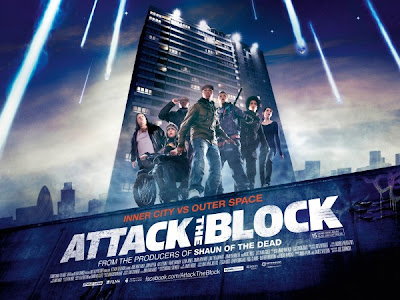 Co-ownership of an indie movie theatre has it's privileges, one of them being that sometimes I get to watch movies slightly in advance of everyone else. Along with a couple members of the press, yesterday I got to watch an advance screening of 'Attack the Block'. I had high hopes for a new twist on the alien invasion genre from the producers and many of the crew behind 'Shaun of the Dead' and 'Hot Fuzz'. It did not disappoint.

Any time someone bitches and moans that there aren't any good movies anymore, that it's all sequels and prequels and remakes and reboots, I point to movies like 'Attack the Block'. Filmmakers aren't out of ideas, movie studios are still making great stuff...it's just that instead of finding something better to watch you (and likely not "you"...but you know what I mean) went to see 'Transformers 3' or 'Fast 5' or brought your kids to see 'The Smurfs'.

So, if you are in Ottawa, do yourself a favour, find some time in your hectic schedule, and get over to the Mayfair Theatre to see 'Attack the Block' sometime between October 21st and 23rd or 26th and 27th. If you don't live in Ottawa, track down this movie and watch elsewhere!
Posted by batturtle at 7:49 PM