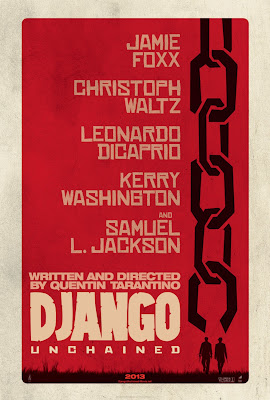 Went to the Moncton multi-plex to make use of free coupons and check out Django Unchained. Some folks don't quite understand the fine art of sarcasm, and I think I scared the kid who handed over our tickets when I commented that I hope that the movie isn't too violent. Then our movie presentation began with the lights not going down, and then the trailers played after the movie instead of before. I was glad to have stuck around so I got to see the Die Hard 5 trailer.

Anyhow, sub-par presentation aside, I really enjoyed the movie. In fact, I think it may be my favourite Quentin Tarantino movie since Pulp Fiction. I didn't really like Jackie Brown, I thought that Kill Bill should have been left alone as one film, Death Proof only held my attention when Kurt Russell or car racing was on screen, and Inglorious Basterds had great moments but I found that its story and style was kind of all over the place.

In fact, the only part in the whole 2 hour and 45 minutes of movie that I didn't like was Quentin Tarantino's cameo. He played an cowboy with an unimaginably awful Australian accent. When he popped up on screen I thought, "Hey, there's Quentin, that's a fun little cameo", thinking that it would be a Hitchcock style appearance in the film. Then he opened his mouth and began to act and I'm pretty sure I actually groaned out loud. Someone should sit him down and tell him that he is a fine and talented copycat of a filmmaker, but he is not a good actor. Unless a director thinks that there is no-one out there who could possibly do the role better than they can, they should stay behind the camera. Quentin, you wrote and directed a really great blood n guts grindhouse tribute of a western, but how about next time you see if Steve Buscemi or Tim Roth is available for a cameo appearance instead?
Posted by batturtle at 11:55 PM