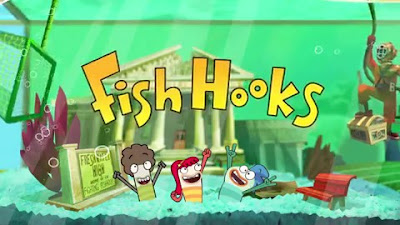 Traditional cable tv has become pretty alien to my daily existence, I haven't had such a thing in my household or a friends place in years. I'm currently visiting my girlfriends parents in Halifax, and they have actual tv. On said tv are a number of free on demand channels, including all kinds of Disney stuff. So, finally got to check out a shoe that a friend of mine works on, called Fish Hooks. Animation runs such a gamut now-a-days between kids stuff to after school fare to bizarre adult offerings, I had no idea what to expect (though being produced by Disney I wasn't expecting something akin to Aqua Teen Hunger Force).

It's a kids show, a very funny one though, set within the word of fish living in tanks at a pet store. The animation is clean and colourful, the jokes are good, and watching a couple episodes made me wish that there were more available to view. It even caught the interest and attention of my girlfriends parents, whom I think it is safe to say aren't exactly the target audience...though I guess none of us would be that. It's a great time to be an animation fan and professional (has been for a while now actually), the offerings and what is going into production isn't just all half hour commercials trying to sell kids stuff on Saturday mornings. Not that shows of that genre don't hold a place in my geeky heart.
Posted by batturtle at 7:52 PM