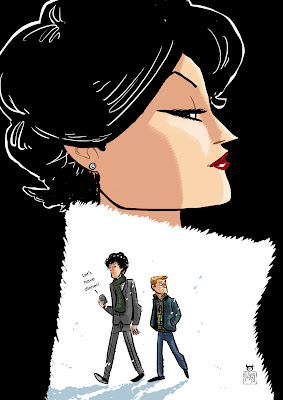 I know that I'm a year late, I am similarly running behind on most of my teevee watching and book reading and everything else in my too hectic schedule, but watched the first pisode of the second season of Sherlock. Can Steven Moffat and the BBC do no wrong!? This episode is titled A Scandal in Belgravia, and like all three of the ninety minute movie length episodes that came before it, it was great. BBC has to be respected for not beating a good idea into the ground, and being ok with formats like the three episode mini-season.

With reimaginings such as Sherlock, I get distracted in how the present day alternate universe is different than ours. If there's a Sherlock Holmes in 2013, it stands to reason that Arthur Conan Doyle didn't start writing stories about him in 1887. Does the writer even exist in that timeline? Did he write more stories about dinosaurs instead? Was Disney's Great Mouse Detective movie a mouse version of some other famous literary detective? Who did Peter Cushing and Michael Caine and Robert Downey Jr play instead of Sherlock? These are the time space continuum conundrums that I think about instead of just sitting back and enjoying quality teevee.
Posted by batturtle at 1:56 PM