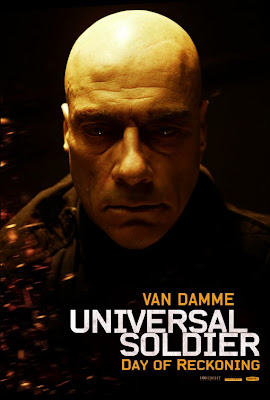 I know that this might sound like I'm just upselling a movie 'cause I always want the Mayfair to do well and sell tickets, but I cannot emphasize enough that Universal Soldier: Day of Reckoning is an incredibly impressive film. It easily could have been knocked off as a phoned-in B-movie sequel, but for some reason everyone involved seemed to actually really care about the final product and the result is something special. Imagine that!

Who would have ever thought that Hollywood could learn a lesson from the fourth Universal Soldier movie? Amongst other overwhelming praise, the movie has not only been called the best action movie of the year, but was even quoted as being better than Skyfall. This film is not just a good guy vs bad guy punch-out, it has some intense acting, some bizarre twists, and elements more familiar in something along the lines of Apocalypse Now. Don't get me wrong, the film also features some great fight scene face-off's, old school car crashes, and rather insane levels of guns-a-blazing action.

And lest we forget, it of course also features a couple of great supporting roles for Jean Claude Van Damme and Dolph Lundgren. The Universal Soldier veterans not only get to show off some old timer fight skills, but also get in some nice acting amongst the violence. If there is any justice, director John Hyams will get to graduate onto grander budgeted motion picture productions after this impressive turn.

Universal Soldier: Day of Reckoning is on tonight at 9pm, and tomorrow at 9:45pm (Sunday the 13th & Monday the 14th) at the Mayfair.
Posted by batturtle at 1:16 PM