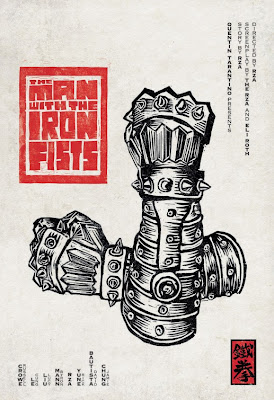 I have seen many a bad movie in my day. You might have heard that the directorial debut from Wu-Tang Clan member RZA, which is presented by Quentin Tarantino and was co-written by Eli Roth, is a bad movie. I would argue that it is not a bad movie, but is in fact one of those rare gems that is so bad that it is amazing.

If you are at all familiar with the music of the Wu-Tang Clan, it is not all that surprising that one of them would have an interest in putting together a kung-fu movie. Being that Quentin is involved, it is equally logical that the film is a loving homage / copy-cat of an existing geek genre that that his director worships.

I have read that RZA filmed so much footage that there was some thought along the lines of cutting it into two films, Kill Bill style. That did not happen, and I think that somewhere along the line they went a bit too far and edited down to a slim 96 minutes. In trimming down to this short running time, it feels like that by mistake a bunch of important plot-points may have been lost in the shuffle. The movie races along, assisted by narration from the director (in the form of his Blacksmith character). If not for the help of this, there is even a higher likelihood that no-one would have any idea what was going on.

To be fair, I have also seen a lot of kung-fu movies, and they are equally poorly put together most the time. These types of cinema aren't exactly to be watched and enjoyed for their great achievements in scriptwriting, you watch them for the cool fight scenes. So, although it might be a bit difficult to pass on exactly what was going on in the movie, all that really matters is that good guys team up to fight bad guys. One of those good guys is Russell Crowe, who seems to be having a great ole' time chewing up the scenery to the high levels of an out of control mad Shakespearian thespian.

This retro grindhouse tribute film is filled with Wu-Tang music, insanely violent kung-fu action, deadly warriors, crazy weapons, prostitute assassins, a Colossus style man of brass, an Oscar winner playing a character named Jack Knife, and of course a man with iron fists. How could a movie with so much awesome possibly be all bad?