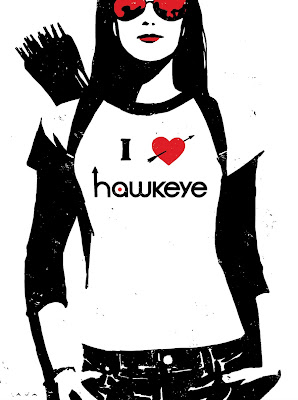 I love the current Hawkeye series from writer Matt Fraction, artist David Aja and colourist Matt Hollingsworth. The best part of the comic is that it is completely self-contained, unlike the bulk of the Marvel Universe, which often entails the burden of cross-over's and tie-in's with other books. That solo factor is unfortunately a major rarity in today's ongoing super-hero mythology. The pitch for the series is that this is what a super-hero does in his off hours from saving the world during his day job. It's a great read featuring an interesting character and shows off some really amazing subtle artwork. If you are a comic reader, even if you have no idea who Hawkeye is or somehow missed the Avengers movie, give this book a shot...it needs your three bucks way more than any X-Men or Spider-man book does.
Posted by batturtle at 10:36 PM