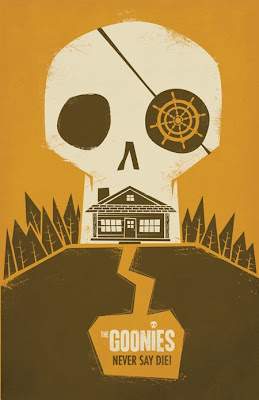 Tomorrow, at long last and thanks to our fancy new digital projector, we screen possibly the most requested film in our modern Mayfair history: The Goonies! I saw Goonies at the absolute perfect time, when it initially came out in theatres I was pretty much the exact same age as the Goonies themselves. I love Star Wars, but am pretty sure that a long time ago I will never be in a galaxy far far away. Even though partaking in a Goonies style pirate treasure quest adventure is probably equally unlikely, there was something slightly more believable that it just might happen.

The Goonies screens at the Mayfair tomorrow and Friday the 4th at 3:15pm, followed by a later screening for older geeks on Sunday the 6th at 9:30pm. I have seen this movie a bazillion times, and wish I could see it again, but I am off on an east coast Canadian trip that afternoon. Please enjoy the movie in my absence, and remember to never say die.
Posted by batturtle at 6:09 PM