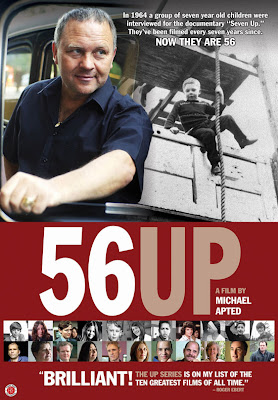 One of the most fascinating documentaries ever produced is the ongoing Up series from Michael Apted. In 1964 the filmmaker began on the 39 minute television project, which interviewed a bunch of seven year old kids, as a researcher. He then took the reigns and ended up directing longer Up projects, which revisited these documentary subjects every seven years of their lives, right up to the most recent addition of 56 Up.

We hosted the Ottawa premiere of the film last night and had a great crowd turn out. 56 Up screens at the Mayfair again tonight and Sunday January 20th at 6pm, and the 21st and 23rd at 6:30pm. Join us for the latest puzzle to the documentary piece that Roger Ebert has praised as one of the 10 greatest films of all time.
Posted by batturtle at 12:14 PM