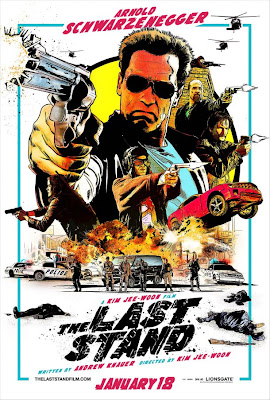 I don't really venture out of the Mayfair to do my big-screen movie watching. It would make me feel too much like I'm supporting the man & also like I was cheating on my beloved theatre. The rare occasion that I do go outside of the Mayfair is when I get free passes to advance screenings, because I am thrifty, and in those cases the multiplex isn't getting my cash. Plus there's always a chance that you might win a t-shirt or a baseball cap or some other kinda movie-geek swag.

This-evening I partook in one of these free movie outings to see Arnold Schwarzenegger's leading role action-hero come-back, The Last Stand. I'm not the biggest Arnold fan in the world, though I of course Love The Terminator, Predator, and True Lies as much as any action movie connoisseur. With the return of one of the biggest movie stars of all time, an "actor" who at one time was the biggest movie star of his time in fact, I would expect something bigger or more original. I would think that if Arnold was going to come out of retirement that he would try to break some new ground or try something new...take a risk, turn some heads, break some rules.

The Last Stand could have been a generic action movie starring him or any other fill-in-the-blank action star of the 1980's or 90's (except for Bruce Willis, who breaks all the rules and is an action star with actual acting chops). The Last Stand is not boring, it's not bland, it's not without humour or guns-a-blazing action...what it is is just another action movie. Every single character in the whole movie is a cardboard cut-out, and every plot-point is by the books without any twists or turns or surprises in store for the viewer.

The biggest shame is that the film is the American debut of amazing South Korean filmmaker Jee-woon Kim, whose films include Tale of Two Sisters, The Good The Bad and The Weird, I Saw the Devil, and a segment from the anthology Doomsday Book. When I read that he was directing Arnold's action vehicle I expected some grand cinematic effort. Instead it's just a movie with good guys & bad guys that could have been a script from 25 years ago, with the exception that Arnold spouts some "I'm too old for this" jokes every so often.

Oh well, maybe his Danny DeVito reunion film Triplets will be better...oh wait, there's no way that that won't be awful. At least we have another Expendables to look forward too.
Posted by batturtle at 11:52 PM