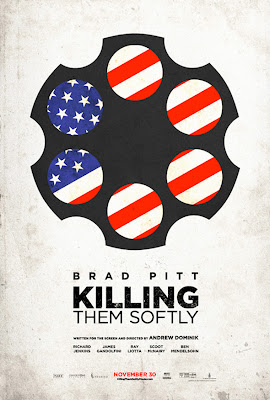 I would never want to make light of the horrible violence that continues to unleash itself around the planet, whether that be in the military form of war, or gun related attacks on schools or movie theatres or any other location. Any time such a horrible thing happens, fingers get pointed at pop culture and the arts as the blame for influencing people to be so violent. This is of course ridiculous. It seems especially like a point of foolishness when in 2013 the NRA points at films like American Psycho and Natural Born Killers as the problem. You would think that they could at least lay blame on a movie not from 1994 or 2000 and instead admit that guns just may be the problem. How about trash Django Unchained or The Last Stand instead? At least falsely lay fault on a motion picture that is still in theatres.

I know for a fact that violent movies don't effect most people to resort to mass murder. And if a movie did, it is not the fault of the movie, because that person that related to horrendous violence is crazy. If a movie didn't set them off, a box of cereal or a squirrel would do the same thing.

I have seen pretty much every violent movie ever made...I've also read all the violent comic books and used to play all the violent video games. Partaking in all of this viewing and reading and playing has never influenced me to go and buy a gun and then start randomly shooting everybody.

On top of that, one of my favourite sub-genres of movies is one featuring an assassin theme (like The Professional, Femme Nikita, Collateral, Road to Perdition, Hanna, Confessions of a Dangerous Mind, Ghost Dog, Grosse Point Blank, The American, etc...). The latest cool movie with a central character that is an assassin is Killing Them Softly. There will be no horrible repercussions from you seeing this movie, especially if you do it the next couple of nights at the Mayfair (tonight at 9pm and Monday January 21st at 9:30pm).
Posted by batturtle at 12:01 PM