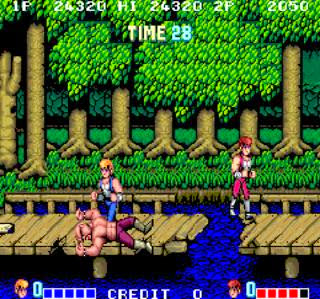 We have an amazing venue in Ottawa called House of Targ, our neighbours right across the street from us at the Mayfair Theatre. There you can catch some great live rock n roll, and if that weren't awesome enough, they also serve delicious perogies, and the place is packed with vintage pinball and arcade games.

Got a dose of Targ last night. Where, amongst other great games like Tetris and Galaga, and pinball with themes like Star Wars and Doctor Who, also played some Double Dragon. It gave me flashback memories of playing the same game in my junior high years, when we would sneak off of school grounds to go to the arcade during lunch hour. I remember standing in a mass around the arcade game as a bunch of kids looked on in awe and wonder as a couple of expert level video game playing kids approached the finale of the game. I think a lot of kids were late for school that afternoon, because witnessing the outcome of Double Dragon was much more important.

-- Quarter Century Late Spoiler Alert! -- I think that us kids couldn't have been more shocked if a Sasquatch walked into the room when the two battling Double Dragon lead heroes were forced to turn on each other after kicking and punching the final big bad boss to death. There was an audible gasp in the room that I'm sure that was more dramatic then any sound a kid let out while watching an actual piece of human history like the moon landing. That was the kinda thing that kept kids attention before Netflix and the internet.

Posted by batturtle at 3:55 PM