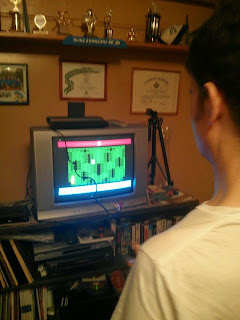 In my girlfriends parents basement, it the wilds of Dartmouth - Nova Scotia, we discovered a historical artifact of geekdom in the form of an Atari 2600. In an age of throw away technology and a world where cel phones seem to have a working lifespan of a few months, extra impressive was that that damn thing still works!

Recently at the Mayfair we screened a documentary that I really enjoyed called Video Games: The Movie. Amongst other video game related topics, it mentioned the E.T. video game that almost completely ruined the industry. It's notorious as maybe the worst video game ever made. It was slapped together in a very short period of time with little in the way of imagination or bother in trying to make the game any fun. Hence, it's frustrating, confusing, and you don't really know what's going on. As an extra added bonus, it's filled with glitches and stuff freezes all the time. They hoped to ride the coat-tails of the immensely powerful movie and merchandising phenomena. They failed. In the process they almost sunk the industry thanks to bad press and infuriated fans. A valuable lesson learned about treating your fan base with respect.

I played Tron and Ms Pac Man and some other ancient games that they had in their basement hiding video game library. They seemed like holodeck virtual reality joyrides in comparison. to the made ET game shamble. So, thank you Atari 2600, for allowing me to be able to identify with and feel sorry for all of those poor kids who had Christmas ruined thanks to the unprofessional video game assembly of a lil game called ET.

Posted by batturtle at 2:00 PM