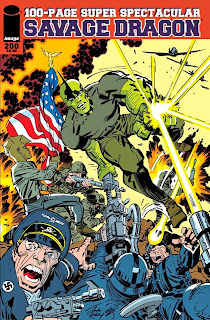 In a very nifty comic anniversary event, Erik Larsen has done a mash-up with Jack Kirby, every good comic geek's artistic and imaginative hero. More impressive since the late great Kirby passed away some 20 years ago. None the less, the King of comics continues to have new work released, thanks to a lifetime of non-stop drawing. This specific piece was from an unused Captain America piece, and was originally a print to raise funds for the Kirby Museum. I have been reading Savage Dragon since day 1. By the time this issue comes out I'll have all 200 issues up on the shelf. Erik Larsen writing and drawing 200 consecutive issues is one of the most impressive feats in the history of the medium. As an added bonus, it just happens to be one of the most fun, biggest imagination, consistently entertaining books that one could want to read. Erik shows no signs of wanting to stop,I have a feeling that in 10 years or so there'll be a 300th issue of Savage Dragon, maybe with another Jack Kirby cover to help celebrate the event.
Posted by batturtle at 1:32 PM