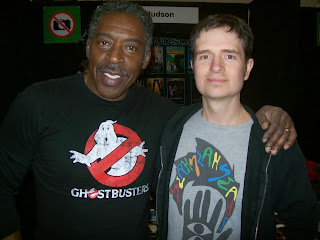 Today I met a real live Ghostbuster! Or...well, an actor who portrayed a Ghostbuster in the movie...but you know what I mean. Mirror Comics writer / artist / president Dominic Bercier bumped into Ernie Hudson outside of the washroom. They had a brief conversation, and Mr. Hudson invited Dom to drop by his table later to say hello. When Dom told this to me, I replied "I'm going too!". I am not shy at the prospect of taking part in potential once in a life-time opportunities. I love Ernie Hudson in Ghostbusters...just recently I ranted about he and his character being ignored on the cover and back of the Ghostbusters blu-ray.

We gave Mr. Hudson a couple of our comics and he actually took them with interest. It was clear that he wasn't going to throw them in the trash as soon as we turned our back. He was kind enough to take multiple pictures with us. He was quite impressed with my Ghostbusters tattoo and he took a picture of it in turn. It's so nice to meet someone you admire and they end up being a great and lovely person that appreciates their fan-base.
Posted by batturtle at 9:11 PM