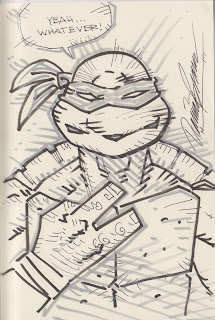 I don't acquire as many sketches as I once did in my hey-day of comic art collecting. Mainly because I have met a ton of artists over the years, they've been kind enough to draw stuff for me, and so I don't wanna bother them again. I don't really need back-up sketches to show off to prove that I've met someone. Having one sketch from an artist is awesome and plenty.

I do manage to add a handful of new pieces to my collection every so often, usually getting a couple new ones every time I hit a convention. At last weekend's Pop Expo here in Ottawa, I talked one of my Mirror Comics bosses into doing a sketch for me. I left it up to Dominic (Bercier) to draw whatever he wanted. He chose to do a Ninja Turtle. I love the Ninja Turtles, so that is fine by me. He seems surly...I think it's Raph.
Posted by batturtle at 3:23 PM