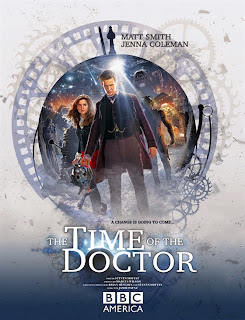 I don't want to make the watching of an episode of British sci-fi teevee sound too over-important, but I went into watching The Time of the Doctor feeling a bit like approaching a wake. I knew from previous Doctor Who experience that I would likely love the episode, and it would most definitely end in tears.

The modern Doctor Who is maybe my favourite teevee series of all time. The last two actors who have left the role behind broke my geeky little heart in doing so. I don't know why British actors can't just be happy with the gig at hand and stick with a series for a decade or so. I do understand the concept that an actor wants to try new things once their carer gets to a slightly safer spot and they have a few dollars in the bank. It also must be nice to leave 'em wanting more instead of driving a character into the ground and becoming supremely type-cast. And, of course there's the point that if the brilliant David Tennant hadn't left we wouldn't have gotten the follow-up brilliance of Matt Smith, and if Matt Smith hadn't left we wouldn't have the impending brilliance of Peter Capaldi.

Well played Mr. Smith, your time as the Doctor will not be forgotten,and you will be missed. Looking forward to seeing you back for the 60th anniversary of the series in 10 years.
Posted by batturtle at 4:02 PM