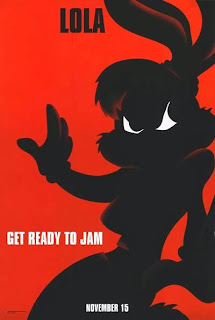 I'm spending my Boxing Day afternoon working the Mayfair box-office, where I hope a whole bunch of people show up to take in the glory that is Space Jam. I think that for folks younger then I who are fans, Space Jam is their Monster Squad or The Goonies. The glow of excitement and anticipation that I've seen in movie geeks eyes at the mention that we're screening the Bugs Bunny / Michael Jordan sci-fi mash-up has been quite the overwhelming joy to witness. There has been major excitement on the social media, now let's keep fingers crossed that that translates into real world dollars. This weird 1990's imaginative merchandising machine holds a special place in my heart, if only because it sounds like a movie plot much too bizarre to be true. And, of course, Bill Murray is in it.

Space Jam screens today at today and tomorrow at 3:15pm, and Saturday January 28th at 3:45pm
Posted by batturtle at 8:29 AM