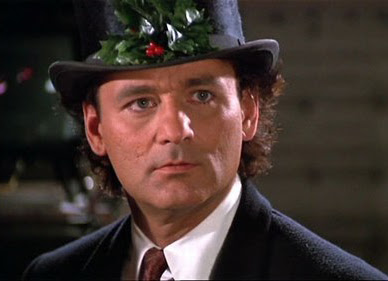 Two posts in a row with a Christmas Carol theme.

The festive Mayfair season kicks off with Scrooged, a modern retelling of the greatest yuletide tale of all, A Christmas Carol. A 1980's version of the Charles Dickens literary masterpiece starring Bill Murray in the central role of a man who loses his soul amongst the greed and power of success. As in every version of the story ever re-imagined, the scrooge of a character is visited by ghosts of the past, present and future as the spirits attempt to teach him a valuable lesson about not being a jerk to everybody all the time.

As with many of the X-Mas-y themed movies we're showing in December, my harsh criticism of you if you don't like it is that you are dead inside. This thought does of course go against my view that movies are a subjective and not objective. It's a little course on my part mayhaps, but if Scrooged doesn't fill the most bah-humbug of human being with wonderful joy filled holiday feelings, there might be something wrong with you.

See Scrooged tonight (Monday December 5th at 9:30pm) at the Mayfair, and if you miss that you have a matinee second chance (Sunday December 11th at 1pm).
Posted by batturtle at 1:24 AM