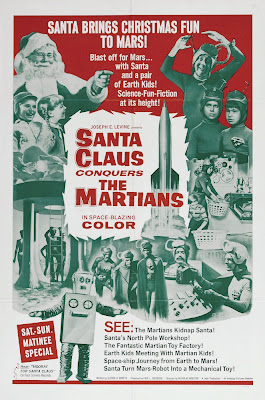 At #78 on the IMDb worst movies of all time list sits a little holiday gem titled Santa Claus Conquers the Martians. There are tens of thousands of movies made in the past century and a bit, and a mere 77 places away from what has been deemed the worst film ever made by humans sits a movie about Santa being kidnapped my Martians so their lil' alien children can get gifts too. If that's not accolade enough for a motion picture, it also can take pride in being a film roasted by the award winning, bad movie watching geniuses at Mystery Science Theatre 3000. Some twenty years ago in the far off time of 1991, Joel and his robot friends Crow and Tom Servo were forced by their mad scientist tormentors to endure this most stunningly awful of holiday treats. Amongst other bits of hilarity, the episode gains legendary status amongst fans for containing Crow's heartfelt musical rendition of "A Patrick Swayze Christmas".

Some people don't have an appreciation of bad movies. They don't spend their free time watching films about the Sharktopus or non-sequels to Troll or anything starring Nicolas Cage from the past ten or fifteen years or so. Those people are sane and wise and we can learn from them. Film fans like myself actually go out of our way waste our precious limited time on this earth to watch bad movies of our own knowing free will. Not quite sure why we do such foolish things, but I cannot lie about how much I do enjoy a good bad movie.

Hence, despite it being terrible, I encourage you to get out to the Mayfair for a truly great awful movie experience. Santa Claus Conquers the Martians tonight (Friday December 9th at 11:30pm) and returns for a slightly earlier encore screening on Sunday (December 11th at 9:30pm).
Posted by batturtle at 4:30 PM