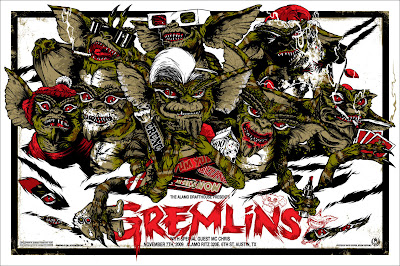 A couple years ago my brother and I, along with his girlfriend of the time, were spending our Christmas Eve gorging ourselves on food and watching a Christmas classic film at my mums house. The Christmas classic was Gremlins. My brothers now ex-girlfriend wasn't a giant movie buff, and hence wasn't familiar with the movie. When we said we were going to watch a Christmas movie, she had something in mind more along the line of something like Miracle on 34th Street or It's A Wonderful Life. She did not expect a film in which a mother defends her home against mischievous little bipedal reptilian monsters with weapons of knives and a microwave. She got quite upset with us in our definition of what a Christmas film is.

Gremlins takes place at Christmas time. The Hollywood back-lot town where the film is located is covered in a blanket of wonderfully fake movie-magic snow. There's Christmas trees and Christmas carols and we all learn a valuable Christmas lesson. It's as much of a Christmas film as A Nightmare Before Christmas, Christmas Vacation, White Christmas or any numerous versions of A Christmas Carol. I daresay it is the favorite Christmas film of many a people. It's certainly right near the top of the list of requested films from Mayfair patrons over the last few years.

Gremlins was executive produced by Steven Spielberg, written by Chris Columbus (who went on to write The Goonies and Young Sherlock Holmes for Spielberg, and direct a couple of Home Alone & Harry Potter movies), directed by Joe Dante (The Howling, The 'burbs, Matinee) and features an amazing score and an unforgettable theme song from the late great Jerry Goldsmith (L.A. Confidential, Poltergeist, Chinatown, a ton of Star Trek stuff).

And, have you ever wanted to have your very own Mogwai as a pet? Well, tonight you have two chances to win one of the fluffy little creatures thanks to our friends from Lost Marbles. If you win one though, please do remember the three rules: Keep it out of the light, don't get it wet, and no food after midnight. Very important.