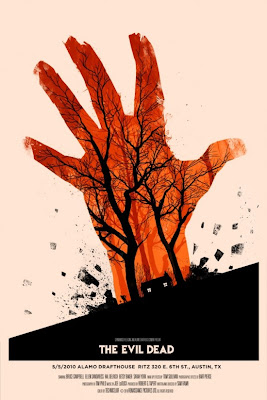 Stephen King declared that The Evil Dead was "the most ferociously original movie of 1982" (the movie is actually from '81, but I think most people saw it the following year). Considering that around that time horror films the likes of Basket Case, The Thing, Poltergeist and King's own Creepshow were released, he must have been quite a bit impressed. Amongst praise from other sources the likes of Fangoria Magazine, The Evil Dead became an indie horror phenomenon. And although it didn't quite make Sam Raimi, Robert Tapert and Bruce Campbell household names, it did get their foot into Hollywood's door.

The Evil Dead is amazing in it's no-budget accomplishment. Although I like Evil Dead 2 better, and Army of Darkness the best, seeing the first chapter of the not quite fitting together trilogy big screen style is a real (and rare) cinematic scary good time. And of course, Ash isn't quite Ash yet either. He's not the selfish jerk of an anti-hero, he has no chainsaw arm and doesn't spout endless catchy quips and exude sexual innuendo. What the film has though is Bruce Campbell's big screen debut, hence is one of the most important films in all of history. For where would we be without Bruce Campbell?

Lost Marbles Geek Night presents The Evil Dead - Friday June 17th at 11pm, with an encore presentation on Sunday June 19th at 8pm (for those horror geeks who have earlier bedtimes).
Posted by batturtle at 4:12 PM