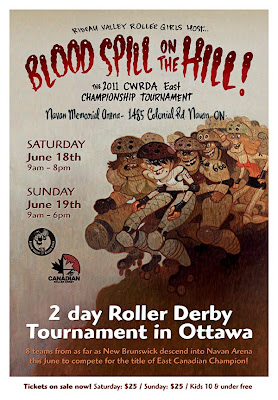 This weekend, my Rideau Valley Roller Girl friends host the Canadian Women's Roller Derby Association east championship tournament. A batch of teams from across Ontario and from as far off as the mysterious land of New Brunswick will touch down on the unsuspecting city of Navan for a mighty batch of gladiatorial roller-skate styled sports combat. Partaking in a regular old run of the mill two teams playing off against each other derby bout is something pretty action packed. Having no less than eight full roster teams hit your city for an event, well...that's something else entirely. Attend the tournament for all the derby excitement, and stick around to see if Navan is still left intact by the time things wrap up by Sunday night.
Posted by batturtle at 2:57 PM