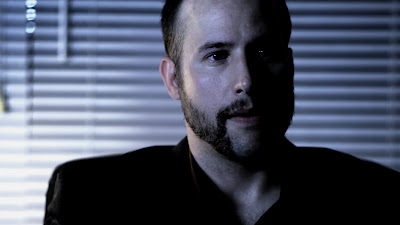 Don't tell anyone, but I find it completely impossible to hit deadlines for my own projects. If I make a deadline of June 3rd for a fest that takes place three weeks later, I can almost guarantee you that not a frame will be shot until sometime after that deadline passes.

Above is a picture from the latest deadline failing project of my friend and frequent collaborator on indie movie stuff here in Ottawa, Ray Besharah. He was nice enough to interrupt his rehearsal for a play that he's in the midst of prepping for to come to my place and shoot a quick scene for a fake trailer for the upcoming Mayfair Theatre event, Fake Trailers Reel Festival. It was a funny quick chain of events in terms of behind the scenes madness. I wrote up the one page scene of dialog around 8pm, he and my camera guy came over around 9:30, we were finished soon after. Then we ran over to the Mayfair to shoot some random cut-away shots of a couple burlesque girls. I love the from the hip guerrilla indie chaos involved in making weird little projects like trailers. Especially that you don't need a linear script or for stuff to make sense really. You just need something entertaining and attention grabbing that will fill two or three minutes of time and be awesome.

Our fake trailer can be seen premiering on Friday June 24th at the Mayfair along with a bunch of other original fake endeavors from near and far (local guys, American, even one from Australia) and a batch of rare classic 35mm trailers. Another weird movie night that could only happen in a city like Ottawa at a place like the Mayfair
Posted by batturtle at 5:39 PM