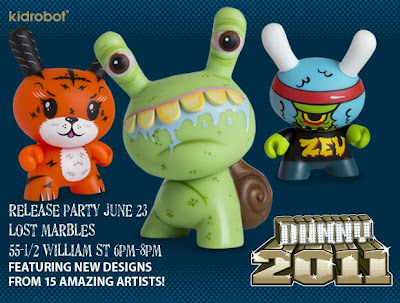 Dunny's fall under the category of what some call useless dust collectors. I've heard directly from people who just don't get it. There are some who look at stuff like this and shake their head in confusion and wonder why an otherwise rationale human being would waste their money on this junk.

There are others who have an opposite point of view and instead call these lil' bunny lookin' things amazing pieces of artistry in the medium that is vinyl toy. I heard one rather poetic rationalizing of the mind of a collector in a documentary I once saw on the subject. I believe the interviewee was a toy designer, and my paraphrasing of what was said is that this world we live in is not perfect. The world outside our door is filled with things we don't like, packed with stuff we don't want to see or think about or have run across our consciousness. So, when we stumble on something that we think is awesome (even something as illogical as limited edition artistically decorated toy bunnies sold in blind-boxes so you don't even know which one you're getting) we want to surround ourselves with it. We make our own perfectly decorated little worlds in our living rooms and bedrooms. And my geeky ideal perfect world currently has fourteen Dunny's in it...it will soon have more.

Though when I go to Lost Marbles to buy some at the release party tomorrow, I can do without that snail-y looking one pictured above. Reminds me too much of some terrifyingly creepy manga I recently read titled 'Uzumaki'. Other than that, if I had the money to spare, I would try my best to get 'em all. And they would collect dust on my shelves while looking neat.
Posted by batturtle at 6:03 PM