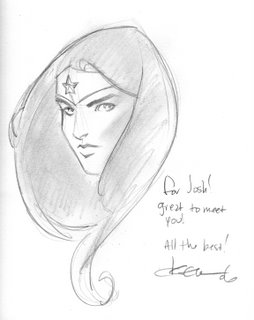 Here's a sketch from Tom's artist alley neighbour and all around nice guy Drew Johnson.

Went to an incredible panel featuring my favorite writer on the planet, Grant Morrison. He was with Deepak Chopra (yes...that Deepak Chopra) discussing comic books and mythology and stuff. Whenever Grant wants to start up a crazy alien based Scientology type religion you can count me in. I'll be first in line. Then I rushed off to the Guillermo Del Toro / Doug Jones panel for 'Pan's Labyrynth'. They were a hilarious Odd Couple. A big fat friendly foul mouthed Spanish comic geek and his lil' thin polite blonde character actor mime side-kick. Somehow at one point found myself chatting with, and then over the weekend befriending, one of Rob Liefeld's entourage. I've never been a fan of Rob's art, but the nice guy reputation of he and his his posse is spot on. Got sketches from Cully Hamner and Kyle Baker amongst others.

Chatted with Amanda Conner at the after party type mingling that goes on every night once the con shuts down for the day. Had met her a couple months previous at another comic con in Pittsburgh. There's a reason that she and her partner Jimmy Palmiotti have become the possible king and queen fan favorites amongst the comic geek community. Besides for talent, they're both just plain nice. And I think that every guy who meets Amanda develops a geek crush pretty much instantaneously.
Posted by batturtle at 1:44 PM