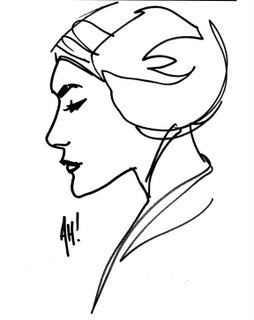 Monique (wife of Tom) accompanied me to a Hellboy cartoon panel. We got free T-shirts. I love the free swag. Got to meet Guillermo Del Toro and Doug Jones thanks to the Pan's Labyrynth autograph session. Guillermo asked for a copy of my short films (which he got). Gave one to Doug too. Good folks, can't wait for P.L. and Hellboy II. The cool thing about San Diego, is that there's celebrity folks walking around for no other reason than geek-ness. I bumped into and had a nice lil' conversation with David Arquette. Ran into Craig, an Ottawa comic book artist friend. Strange running into someone from home amongst a crowd of some 100,000 people. He had just seen Joss Whedon walking about. I was not so lucky as to see Joss. Had great luck in the in the meeting artists and getting sketches game. The highlights were ones from Phil Hester, Erik Larsen, and David Llyod. My personal favorite is a very quick Leia sketch that I managed to get from Adam Hughes. He did it in about 5 seconds with a Sharpie. Awesome. I'm the envey of all my geeky friends.

My screening for '07-07-13' was that night. Their projector was having issues, luckily I had a back-up disc on hand (the poor bastards in front of me didn't think to bring one). It went really well. Folks in the audience seemed to genuinely applaud at the end, I answered a bunch of questions afterwards. Even better was the actress who was there to speak about the film that was on after mine...well, how can I put this diplomatically? She was a bit of a train wreck. People started sneaking out. We did the same after a while. She was just very passionate about the film and no-one else really was. Uncomfortable and hilarious all rolled into one.

At the hotel bar that night had a long conversation with Erik Larsen. Which was pretty cool, I've been reading Savage Dragon since day one. Later found myself talking with Jim Lee. Said I was looking forward to WildCats (just 'cause it's written by Grant Morrison...but I left out that). He said that he should really start working on that...I think it's gonna' be late. Met Dean Halund. He was in X-Files (one of those Lone Gunmen guys) while I was living in Vanouver years back. He also did Improv stuff with my non-blood relation big sister. Spinning from that ended up meeting and re-meeting a bunch of other Vancouver folks who knew her. Like Simpsons comic writer Ian Boothby & his lovely wife Pia. Good folks. Funny how Canadians manage to find each other during their world travels.
Posted by batturtle at 2:24 PM