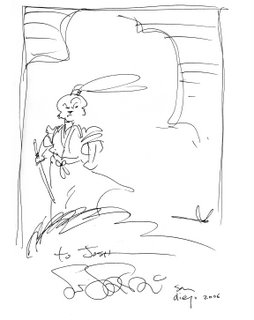 A Usagi Yojimbo sketch from Stan Sakai. The nicest guy in comics.

Last day of the con. So sad. Went back and got that Spike toy that they were giving away as a prize at the blood drive. See, I went and gave 'em my blood a couple of days ago 'cause I thought it was a humorous promotion (a vampire in trade for blood), and 'cause it would be an awesome birthday gift for a friend of mine who's b-day party happened while I was off in California. They ran out of Spike's, but I got some secret info on the QT that if I went back today there might be more. So I returned and used what little charm and charisma I could muster and tricked them into giving me one.

Didn't get an award from the film fest. Wasn't really expecting one, that 'an honour just to be accepted' cliche really is true after all. How about that? Who knew?

Bought some kewl stuff. Got a really nice 'Yeah Yeah Yeahs' concert poster and a Skull the Troll stuffed animal. Managed to ge a batch of last day sketches (Gene Ha, Zander Cannon, Josh Howard, Shannon Wheeler...). Strolled by one booth and there stood Jim Steranko. No one was bothering him, so I went up and we chatted about his current projects. Great guy, and he looks like he should be a character in a James Bond movie or be doing an interview from the Playboy mansion or something.

At the end of the day, the sarcastic voice-of god female announcer that had been updating and chastising all weekend announced that the 2006 Con is now closed. This gets a giant cheer and a big round of applause. Think everyone's just happy that they survived. I'll miss the con so. Barring imprisonment or death, I'll be back next year.
Posted by batturtle at 3:45 PM